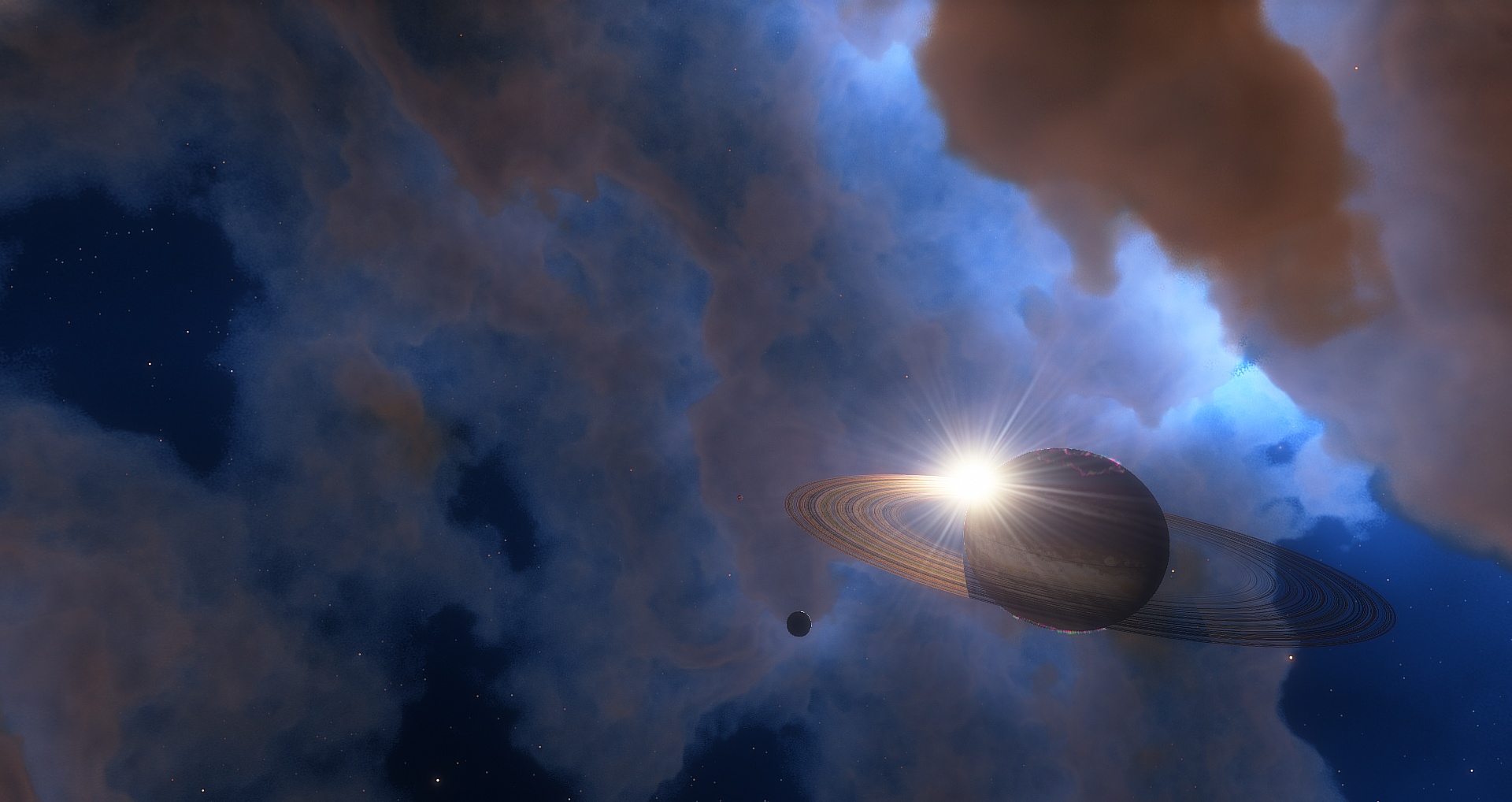 Preparing for release is a challenging time. It is full of work: complete the development of many new systems, pass a large number of tests, and fix a huge number of emerging bugs, most of which are quite small. Some of the work listed below was done a few months ago, there was simply no separate blog post about it. But most was done in the past 2 weeks.

Some fixes and improvements of "exotic" video modes - cylindrical, fish eye and cubemap.

Cubemap projection now has several presets for faces arrangement, which can be used to capture 360 video directly to Youtube/Facebook/etc format. Such video format - six cubemap faces stitched together - in some respects is better than cylindrical projection. It eliminates artefacts near the poles and more rationally uses frame area, which could improve compression/resolution. One problem in SE remains though (aside from still non-solved issues with cutting of some particle effects on cube edges): post-processing like bloom, pseudo lens flares and even FXAA works after projection is done, and so may spread brightness to the neighbouring cube face. This results in seams in the resulting video when watching it on Youtube or a VR headset. Further work is needed, but for now users must disable all post-effects to eliminate those seams. 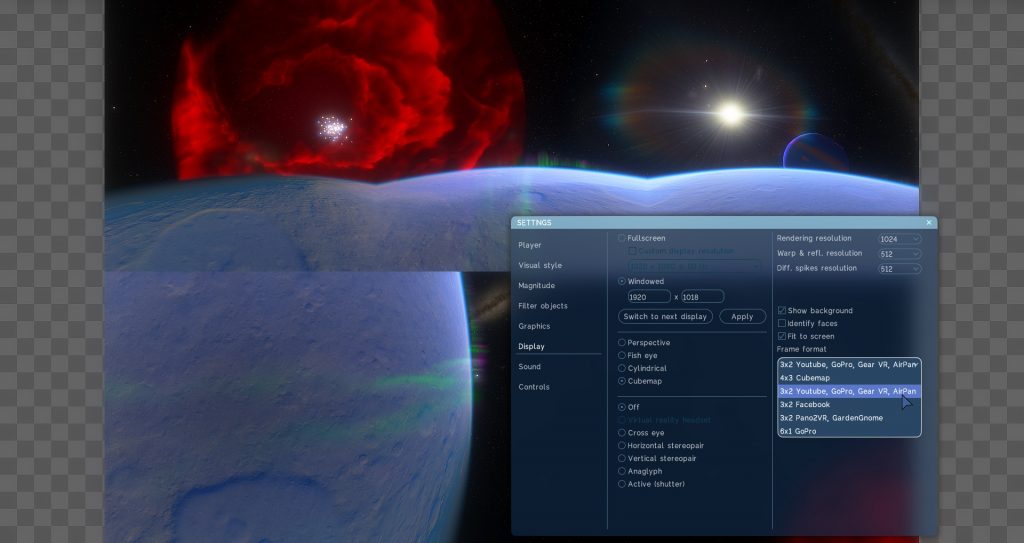 The latter is extremely useful for fixing bugs with catalogs. In the debug mode, SE displays the file and line number of the last occurrence of the selected object among all catalog files (highlighted with a bar on the next screenshot). 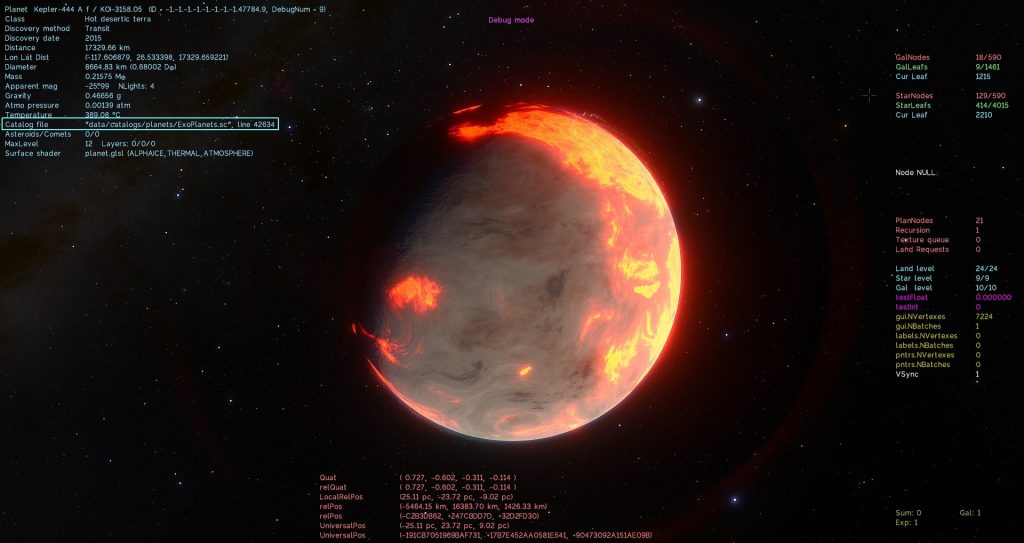 Now the vegetation/desert ratio on planets with life can be controlled with a single parameter. There are 6 other parameters, which I haven't described before. They control the distribution of 3 biomes: forest, grass and desert (more accurately, steppe): climateDesertMin, climateDesertMax, climateForestMin, climateForestMax, climateGrassMin, climateGrassMax. These biomes have different detail texture sets in the biomes and palette preset config: Desert, Forest, Grass.

Procedural gas giants with low axial tilt, like Jupiter, now have a lot of "small" cyclones generated near their poles. The new parameters cycloneOctaves2, cycloneMagn2, cycloneFreq2, and cycloneLatitude2 were added to control them. The cycloneLatitude2 parameter defines minimum latitude at which these cyclones start to appear. 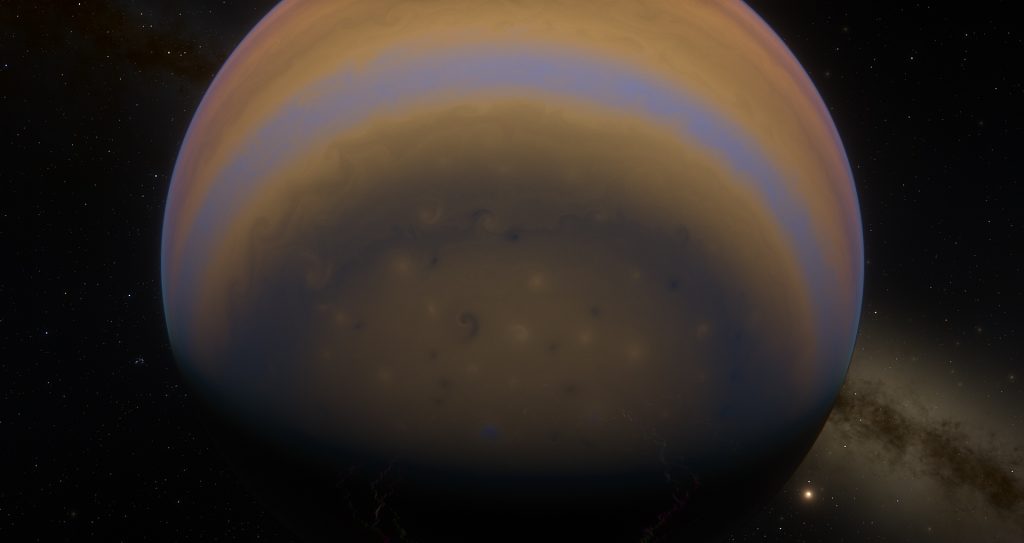 SE now generates Iapetus-like moons (and even planets): bodies which had a ring in the past, which fell to the surface and formed a giant ridge along the equator. In addition, small asteroid-like moons which orbit inside the rings of gas giants also have an equatorial ridge. Real life examples are Saturn's moons Atlas, Pan and Daphnis. These moons were also updated by adding new parameters to their Surface tag: eqridgeMagn, eqridgeWidth, eqridgeModMagn, eqridgeModFreq. 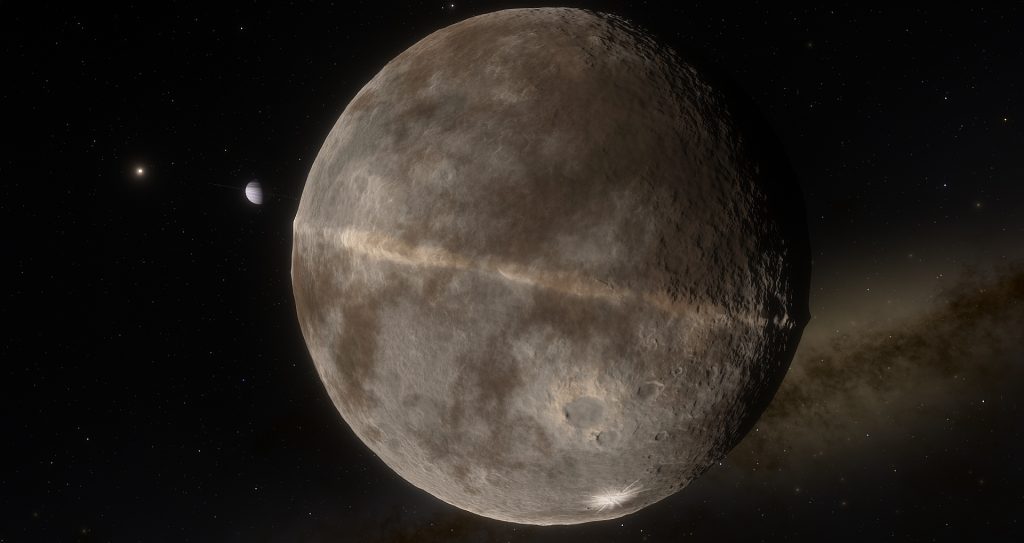 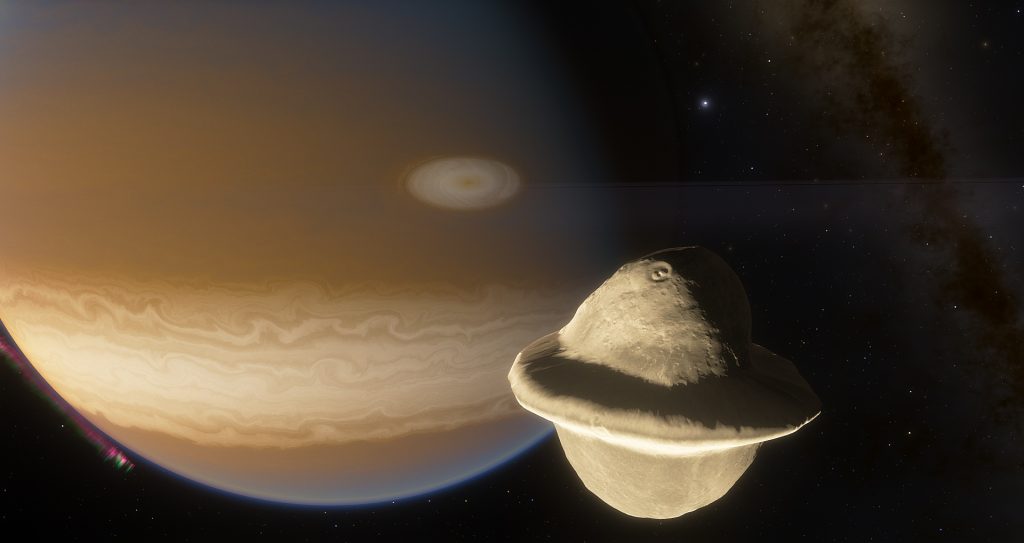 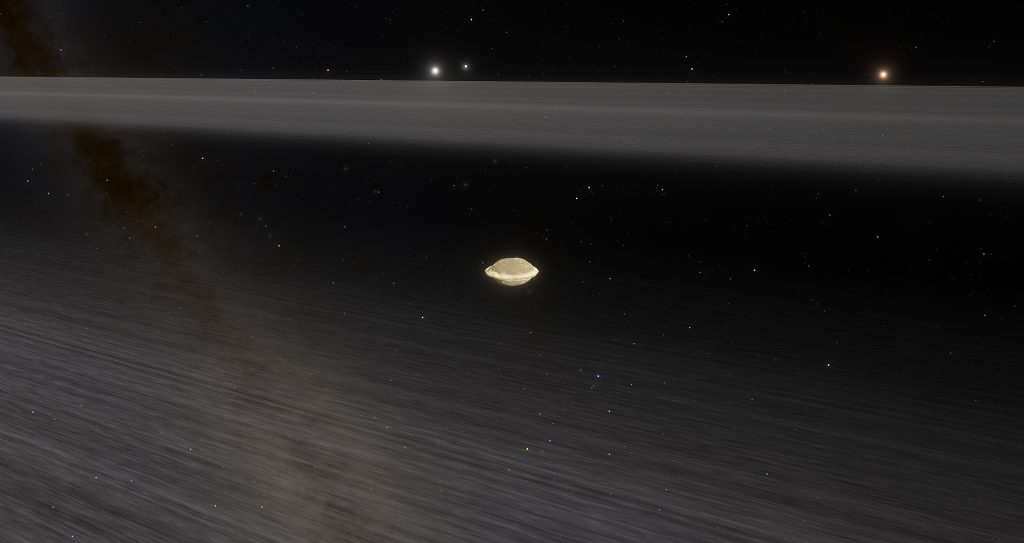 In reality hot jupiters are often found in extremely inclined or even retrograde orbits around their parent stars. 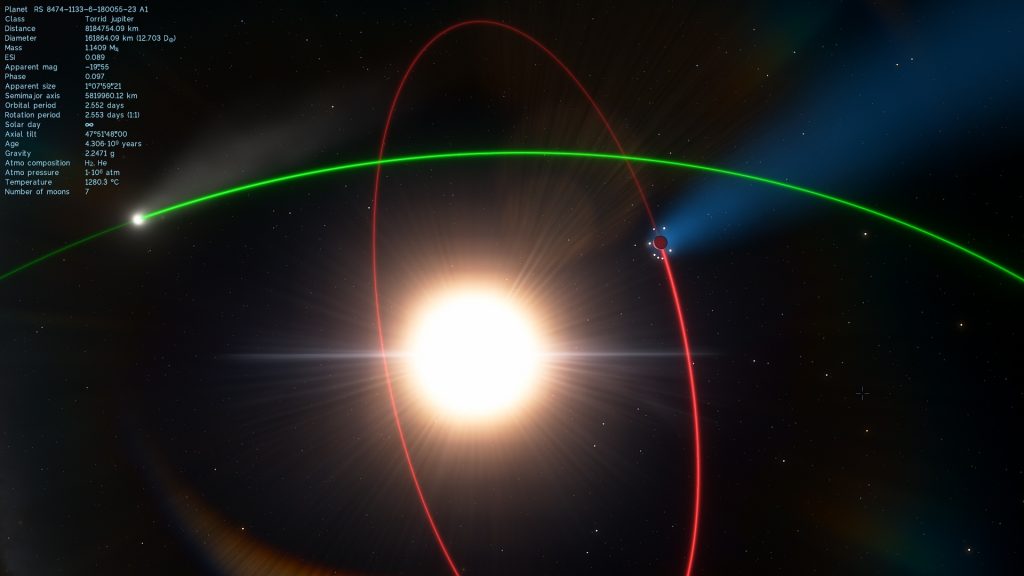 Mod fans will like these additions. Now to add a description to planets of your Star Trek mod, you can just create a folder "locale" in the mod's folder, then create there a file "any_name-loc-db.cfg", where loc is your language, and put description code there. When you edit the description in the Wiki, it saves the changes to the same file from which it reads it, so editing is easy right in SE.

Another thing is that the Wiki now displays which franchise (fictional book/movie/game universe) this object belongs to. For other objects it displays the text "Real object" or "Procedural (generated) object". This can help avoid confusion among new SE users.

Supporting long dash characters simplifies creating/editing descriptions. When copy-pasting some text from the Internet, these characters were displayed in SE as m and s - special SE characters for minutes and seconds. This was annoying and required replacing all long dashes with a short one. Now that's not necessary. 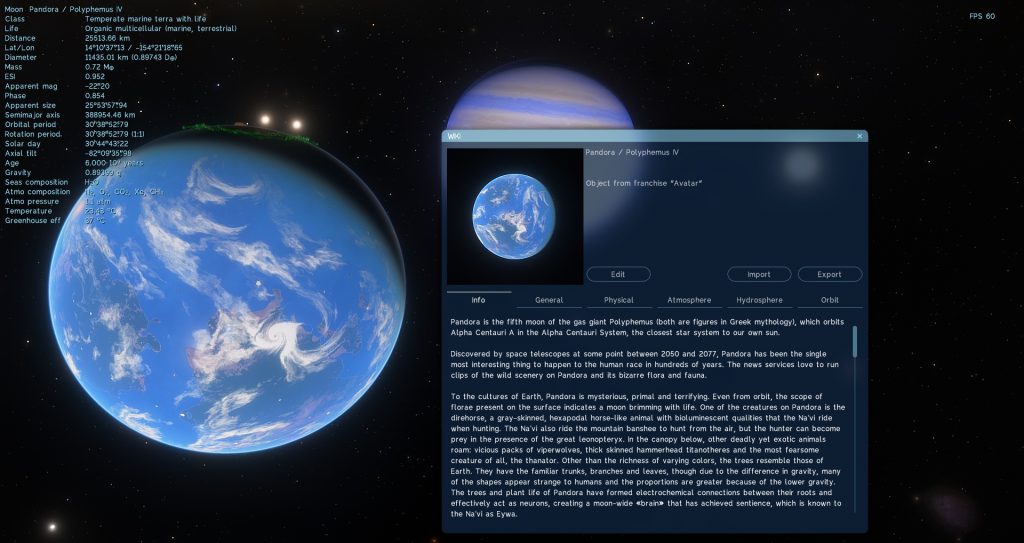 There are a lot of changes in the planet editor; this is due to the fact that I’m tweaking the procedural generator, and a convenient tool for modifying planets on-the-fly simplifies this (the planet editor was created for this purpose, it is still a debugging tool): 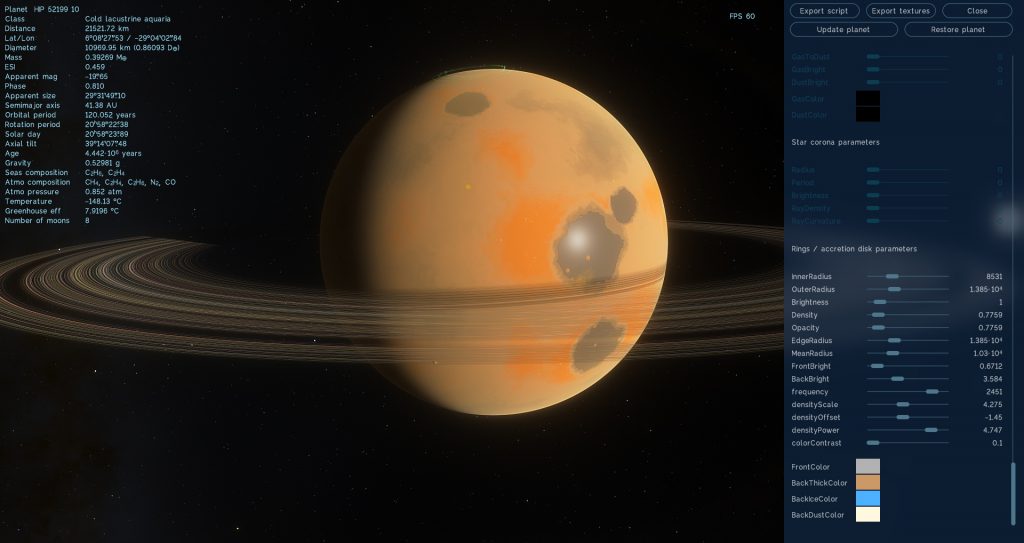 Every update to the procedural generator modifies the universe, so saved locations may not work anymore. When such a change is pushed as an update, I will increase the minor number. The location code has the parameter "Version", composed of the major and minor versions of SE it was saved with. It is compared with the current SE major and minor version, and if they don't match SE shows a warning message (this was introduced in 0.980 or even earlier). Because build and revision numbers are not used in this check, all locations from the same minor version should work. I will try to keep this system, so users will always know if the location will work in some specific SE version. For example, locations from 0.990.15.1535 will work in 0.990.17.2465, but will not work in 0.991.10.3175.

Some bugfixes and changes in the current beta: