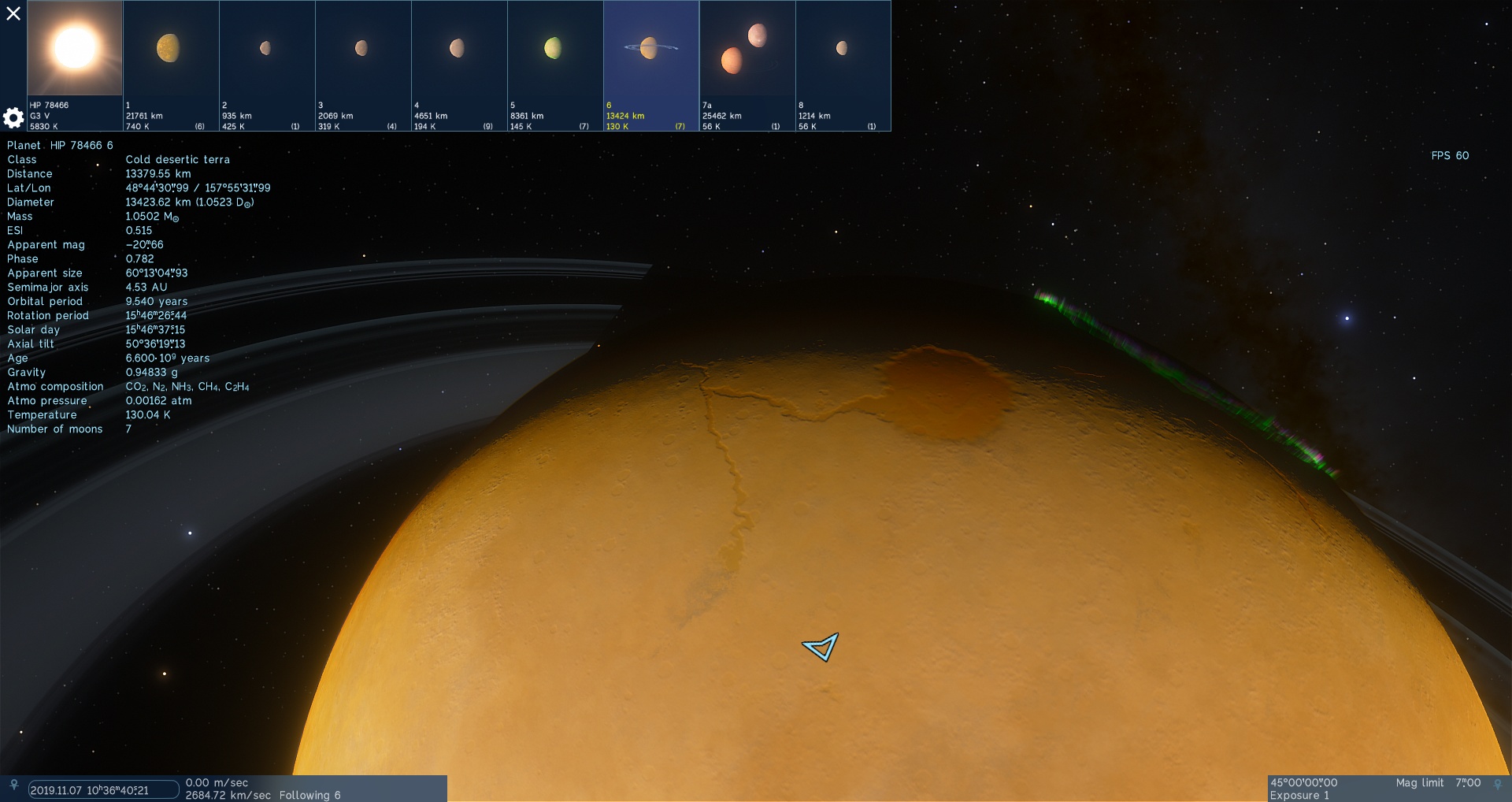 Over the past month I continued working on implementing the new planet classification system for SE. The "approved" scheme is the following:

This format of notation means that, for example, the temperate class lies between 250 K and 330 K, and torrid is greater than 1000 K. These subdivisions are based on the properties of important substances:
90 K is the limit for the liquefaction of nitrogen, methane and other hydrocarbons found on very cold Titan-like worlds;
170 K is the water snow line in the Solar system and the temperature of outer asteroids in the Main asteroid belt;
250 K is the equilibrium temperature of Earth, and the assumed minimum average temperature of an Earth-like planet which could have temperate zones on its surface (with temperatures above water's freezing point);
330 K is close to the maximum temperature on Earth, and the assumed maximum average temperature of an Earth-like planet which does not fall into a runaway greenhouse effect;
500 K and 1000 K boundaries are arbitrary, and could be adjusted in the future to match some observational or theoretical characteristics of the hottest exoplanets.

The mass prefix is different for solid and gaseous planets; it is chosen to match the modern astronomical terminology at some points. Here 'Me' is Earth mass, and 'Mj' is Jupiter mass (318 Earth masses).

Let me explain why the classification is as such.

The first 4 classes are "terrestrial" or "solid" planets, usually referred as "earths" in astronomy. Currently there is no accepted subdivision by bulk composition like this one, because astronomers can't detect the bulk composition from observations of exoplanets - they can only estimate it based on a computed bulk density. This is enough to distinguish earths, neptunes and jupiters, but intermediate cases are hard to classify (a large water planet is indistinguishable from a small neptune, and a massive neptune is indistinguishable from a small jupiter). The exception is our Solar system - we can measure the density distribution inside a planet or moon by the precise measurement of the motion of a spacecraft near it. Combining this with knowledge about various substances under pressure (and for some planets, using information about the propagation of seismic waves), one can develop a model of the internal structure of a space body. Mercury with its large iron core (60% of the planet mass) should be classified as ferria in SE. This corresponds to a theoretical iron planet. Venus, Earth, Mars, the Moon, and Io are classified as terra (Earth is a marine terra); other moons of gas giants and all dwarf planets are aquaria. Ceres and Europa are complex cases - they are on the boundary between terra and aquaria (about 25% of water and ice). Uranus and Neptune are neptunes, Jupiter and Saturn and jupiters. No carbonia worlds exist in the Solar system; this class is the theoretical carbon planet. Aquaria corresponds to the theoretical water or ocean planet, if it is warm enough to melt the icy crust; otherwise it corresponds with an ice planet.

The most used mass/size prefixes in modern astronomy are super- and sub- for solid planets. The upper boundary of 10 Earth masses for super-earths is well defined, while the lower boundary differs in various sources. For SE I chose 2 Earth masses to make the scale more regular. There is speculation about the existence of more massive solid planets called mega-earths. Possible candidate mega-earths are Kepler-10c and K2-3d, although recent re-estimations of their masses have moved them back to the super-earth class. The boundaries of the sub-earth class (in some sources called mini-earth) are also not well defined in literature; I chose it to be between 0.02 and 0.2 Earth masses so both Mercury and Mars fall into this class, but the Moon does not. Interestingly, Ganymede and Titan are also in the sub-earth class (they are subaquarias). The "mini" class is added to SE for planets less massive than 0.02 Earth masses; this is between the mass of the Moon and Ganymede. And the "micro" class is for the tiniest objects, which still have a round shape and should be classified as planets/dwarf planets/moons, unlike irregularly-shaped asteroids. The boundary of 0.002 Earth masses is arbitrary, just to make the scale uniform.

There is no sharp boundary between asteroids and "planetoids", because it depends on composition, tidal heating and the history of the body. For example, Ceres has a mass of 0.0001566 Earths and a round shape, while the asteroid Vesta is 0.0000432 and non-round. So we could assume that the boundary for rocky asteroids is near 0.0001 Earth masses. But we have a counter-example: Mimas (Saturn's moon) is just 0.0000062 Earths and round, while Proteus (Neptune's moon) is slightly more massive - 0.0000083 Earths, and has an irregular shape. So the boundary for icy bodies cannot be defined by their mass only. For now, SE generates a slightly randomized boundary for each procedural body, about 0.0001 Earth masses for rocky objects and 0.000006 Earth masses for icy ones.

Ice giants, or "neptunes", are planets formed mainly from water/ammonia/methane ices (in fact as a supercritical fluid) and often with a thick atmosphere of hydrogen and helium, up to 25% of their mass. But they can also be very massive rocky planets (more than 10 Earth masses) that have a supercritical atmosphere (that is, in a state of supercritical fluid with enormous pressures and temperatures of thousands of degrees). Therefore the term "neptune" looks more appropriate than "ice giant"; it also eliminates confusion from names like "hot ice giant". Neptunes in SE have their own size prefix scale, overlapping with the classes of solid planets. The subdivision by mass is arbitrary, but astronomers often distinguish mini-neptunes into a separate class - those are small planets with extremely low bulk density (typically, rocky or water planets with a thick supercritical atmosphere). It corresponds to both the mini- and sub- classes in SE, but this additional subdivision is done for clarity (more details in the next blog post). The mega-neptunes are theoretical planets more massive than the smallest gas giants (~60 Earth masses), but composed predominantly of ices, not of hydrogen and helium. The overall scale is logarithmic with a 2.5 step: 4-10-25-62.5

Unlike ice giants, gas giants or "jupiters" are composed predominantly of hydrogen and helium. Hydrogen forms a metallic layer deep inside the planet. Saturn-mass planets are sometimes called "sub-jupiters" or "sub-giants", or even "saturns". So 0.2 Jupiter masses is a good choice for this class boundary (the mass of Saturn is 0.3 Jupiter masses). 0.2 Jupiter masses is roughly equal to 60 Earth masses, so the sub-jupiter class overlaps with the mega-neptune class. This emphasizes the difference in the nature of these two types of planets. The mass of 2 Jupiters is around the theoretical limit for the largest (by radius) planet. More massive gas giants are smaller because of the compression of gas by their enormous gravity. Such planets are called super-jupiters in this classification. And the most massive giants of more than 10 Jupiter masses are called mega-jupiters - they are close to the brown dwarf mass limit (13 Jupiters). Technically, brown dwarfs which have run out of deuterium fuel could be classified as extremely massive planets, so the mega-jupiter class could be used for them in future updates (for now SE doesn't model the evolution of brown dwarfs, and so can't determine if fusion already stopped). Super-jupiters and mega-jupiters in SE correspond to super-jupiters in literature, although there are huge differences in the definition of this class in various sources. The size prefix scale of gas giants resembles the scale of solid planets, so one can add the mini-jupiter class by analogy - planets with a mass lower than 0.02 Jupiters (about 6 Earth masses). It is doubtful that such small gas giants could exist in reality. The SE planet generator also don't produce them.

This classification resembles one proposed by the Planetary Habitability Laboratory.

Changes in the engine made to support the new classification system include adding the bulk composition data into planet scripts. SE generates it procedurally if it's missing, but for the Solar system's planets and moons we want to have real data. This data is displayed in the Wiki. Note the new "Hydrosphere" tab - it displays information about seas, including their chemical composition (this is a topic for the next blog post). The procedural planet generator now creates all of the types of planets described above, including mini-neptunes, carbonias and even frozen terras. 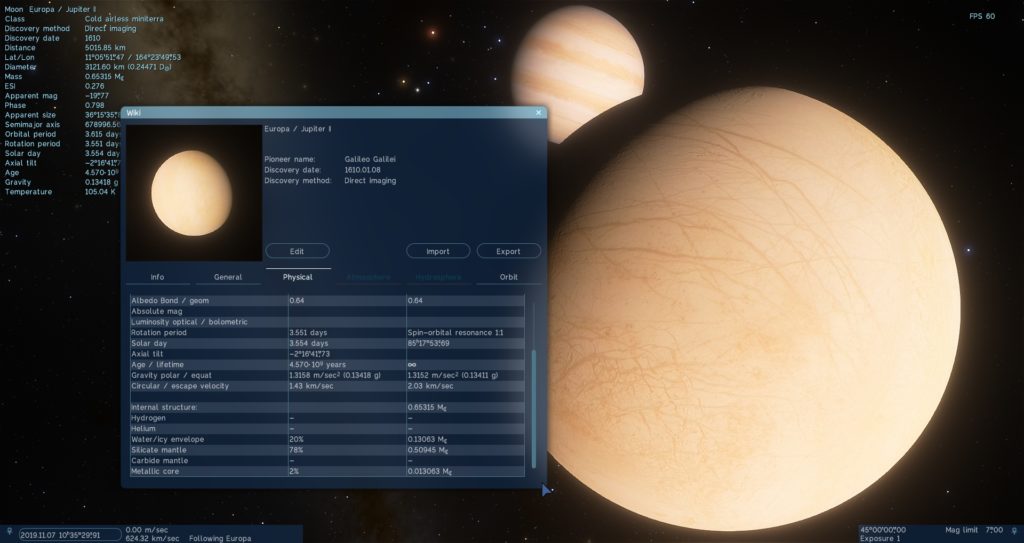