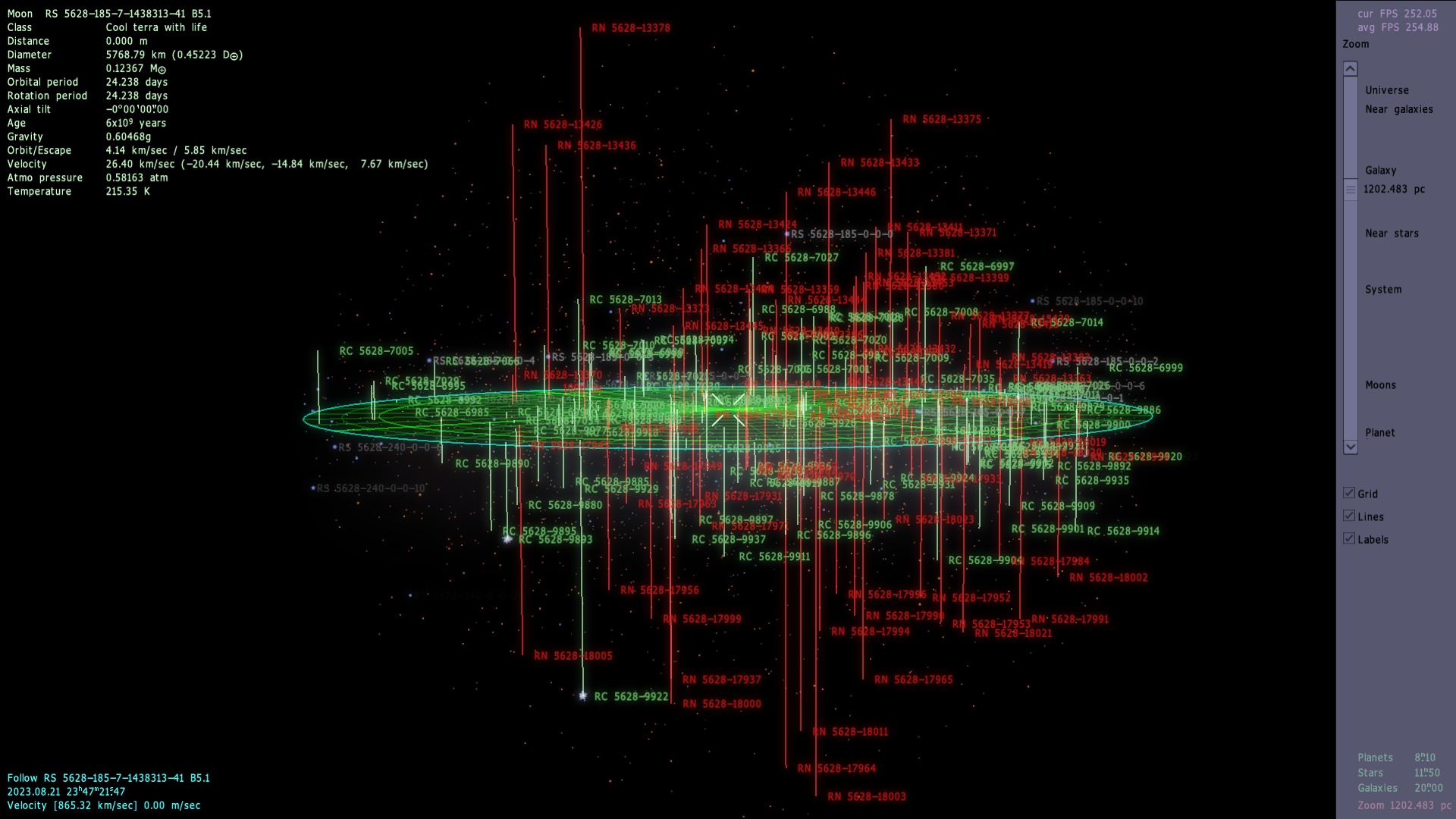 I have almost finished the Map Mode for SE. It is similar to Google Earth, but with the ability of scaling from a single planet up to entire clusters of galaxies. Below are a lot of screenshots showing how to zoom out from a moon to an entire galaxy catalog (Note that SE's infinite universe is to be filled with procedural galaxies, but these have not been implemented yet).

Let's start on a nice terra moon in the M 51 galaxy. By activating the Map mode, we can see the planet itself with its orbital path partially shown. At the right-side of the screen can be seen a toolbar where the most important feature is the long Zoom slider. The labels at the right of the slider show a quick reference for certain zoom levels. The minimal zoom level is the "Planet", as shown in this first screenshot: 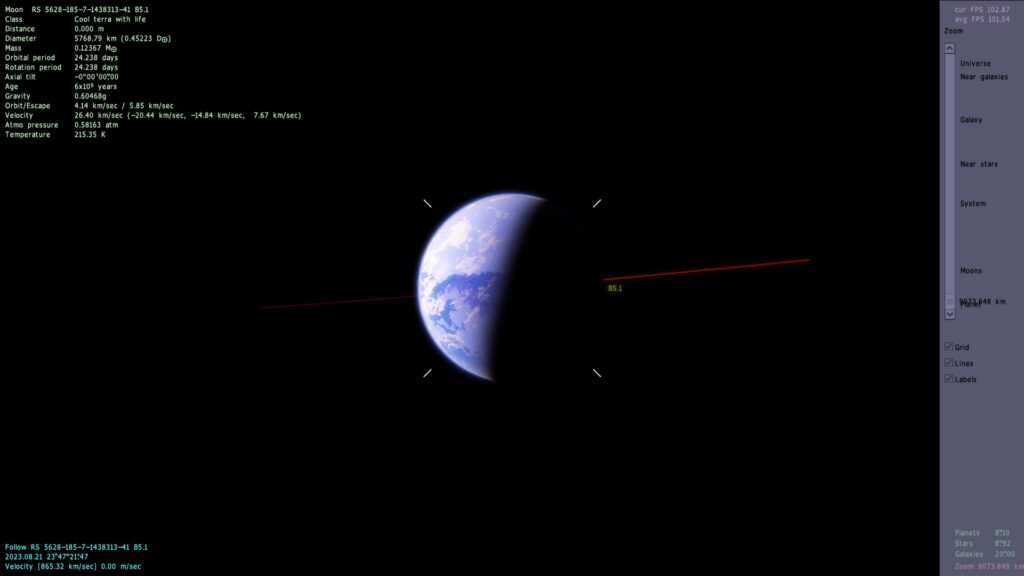 Let's zoom out to the "Moons" level, here we can see the entire moon's orbit and its parent planet. 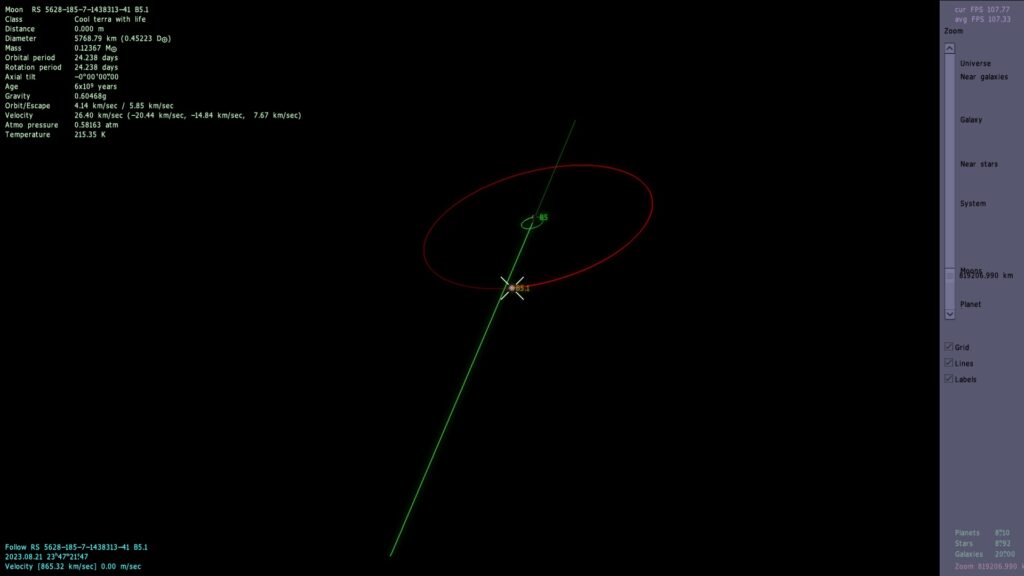 Continue zooming out and we can see a part of the system with a sun, an asteroid belt (gray dots) and a planet with a anomalous high eccentric orbit. 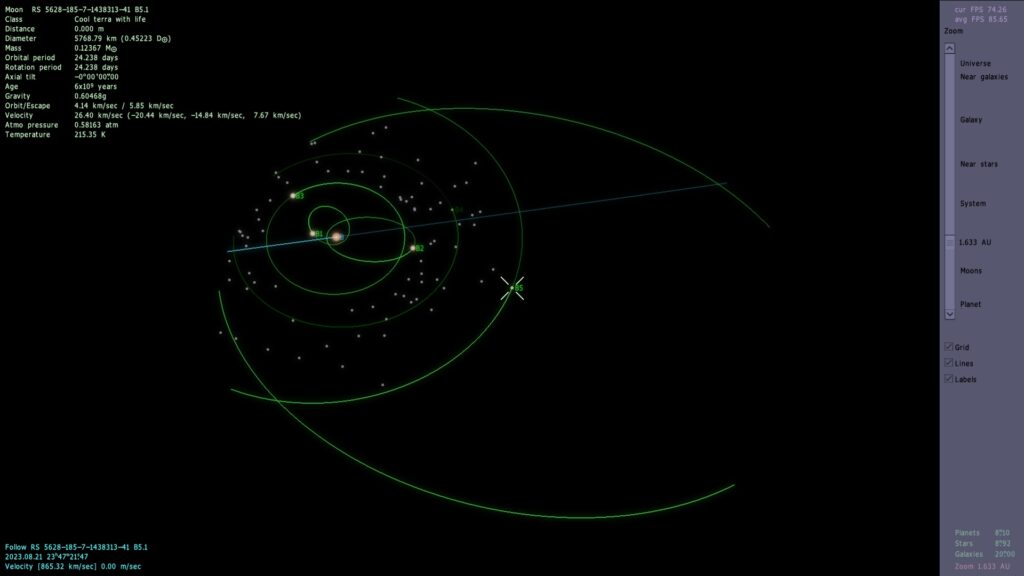 Zoomin out, and we can see an entire system, which appears to be binary. 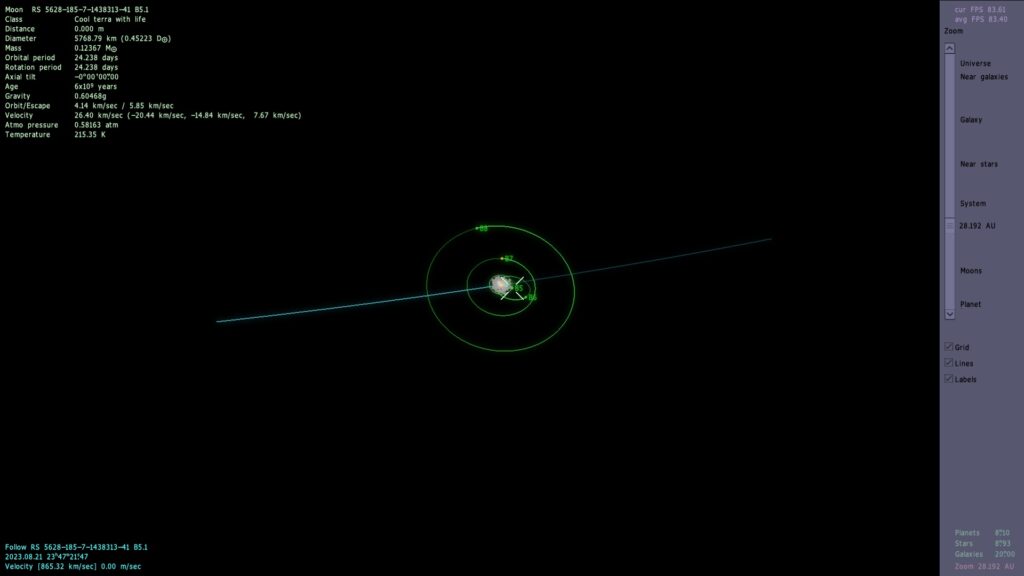 Zooming to the "System" level allows us to view an entire binary star system. 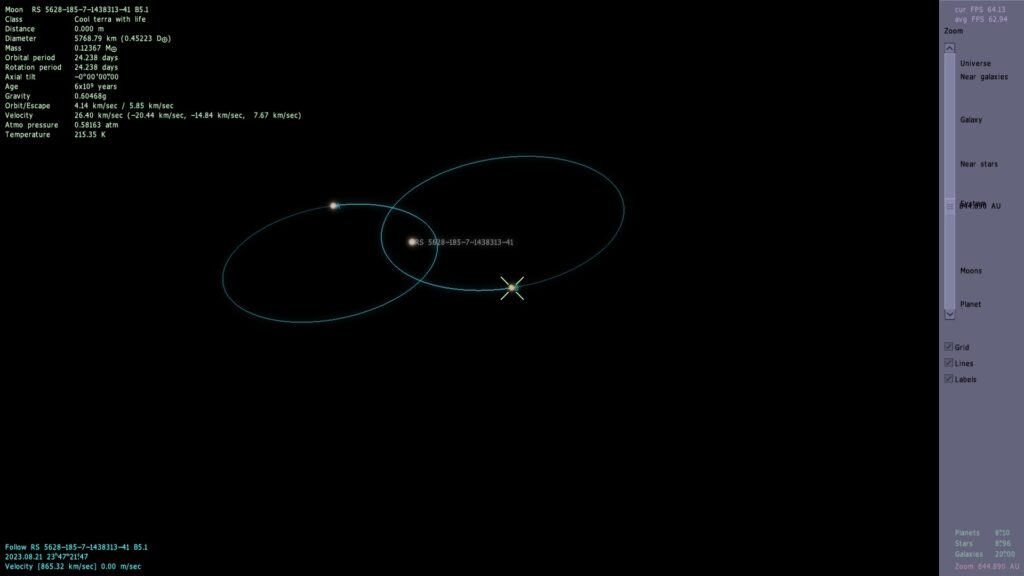 Zooming out some more, and we can see the galactic plane grid appearing. It is centered on the currently selected object (the moon in our case), it can also be switched off by unticking its check-box on the toolbar. 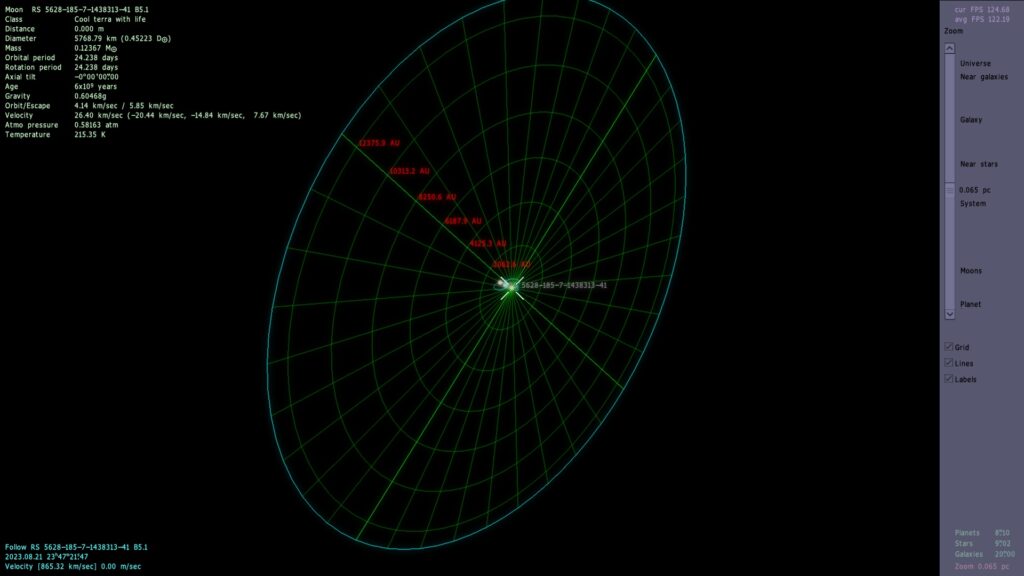 Let's rotate the view (by right-clicking and dragging the mouse) to align to the plane horizontally. 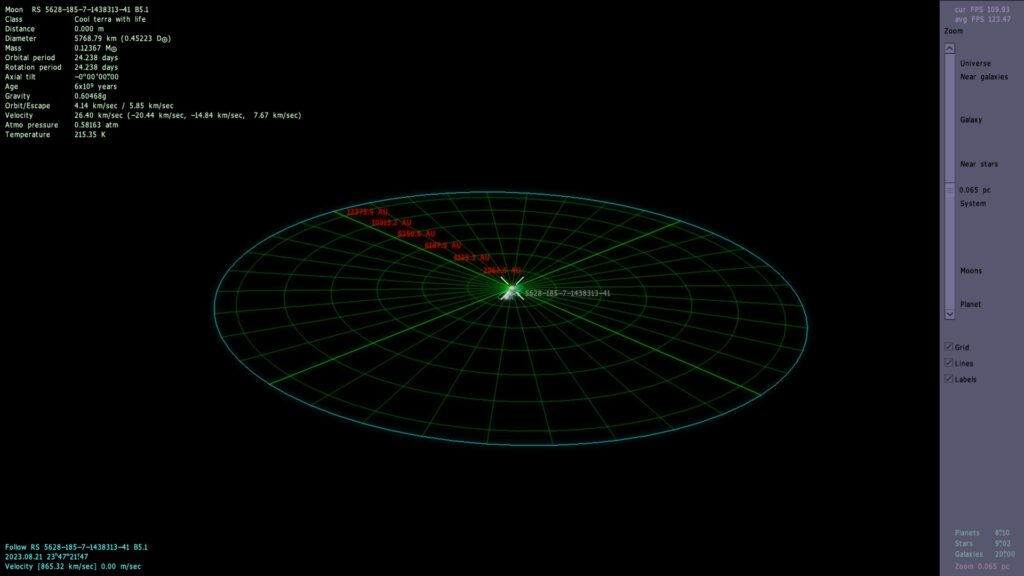 Zooming out some more, and we can see neighboring stars. 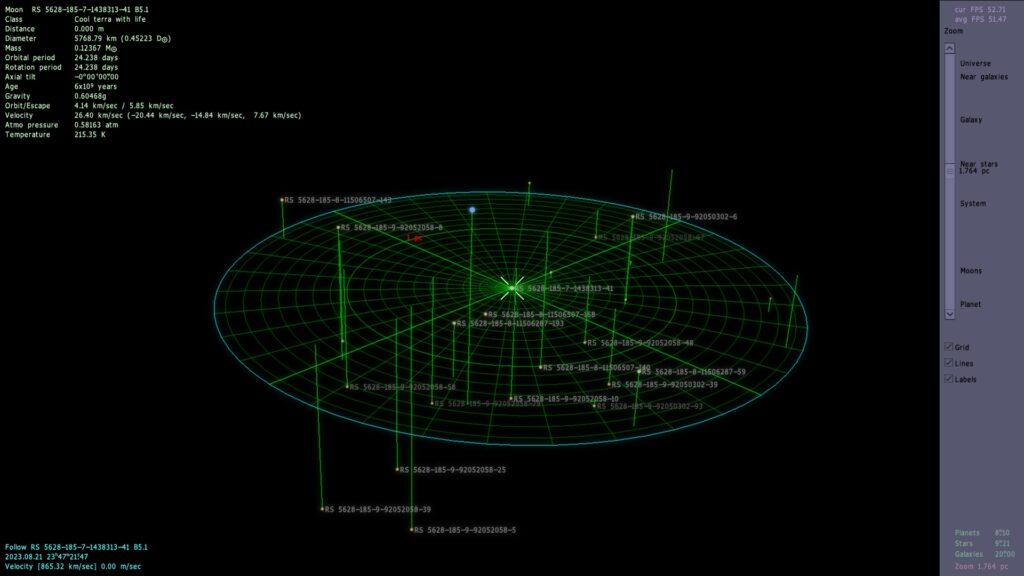 From another viewpoint, the green lines give us visual information about the elevation of stars above and below the grid plane. 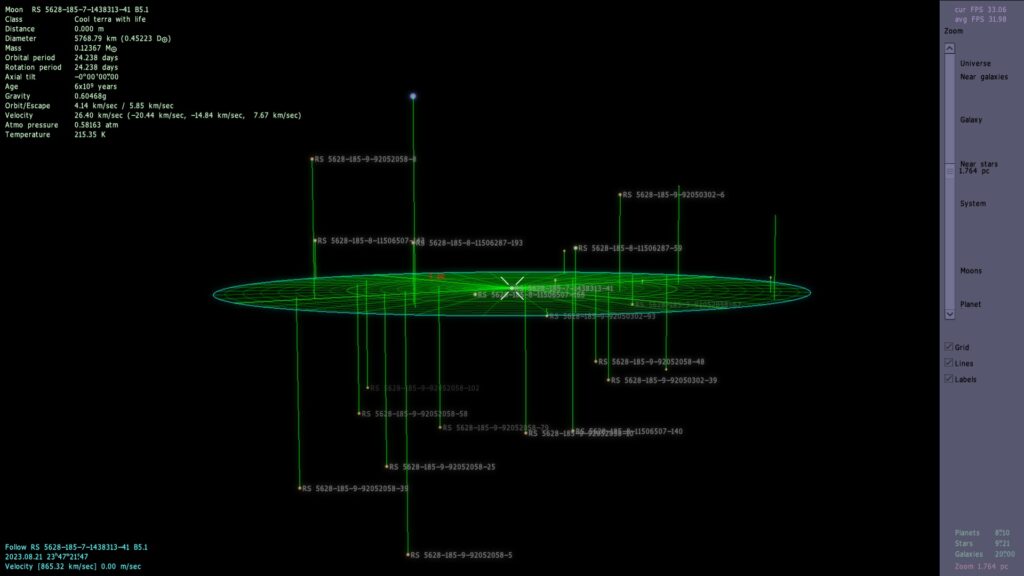 Zooming out some more, and we see many more stars, but only the brightest ones are shown, because rendering all of the stars is impossible on this large scale, and would overload and overcrowd the map display. The green lines disappear too, this also happens to prevent the map display from being overloaded. As we can see, in the Map Mode the engine renders only those objects that are located inside the spherical region of the grid where its centered on the currently selected object. The radius of this sphere is controlled by the Zoom slider. 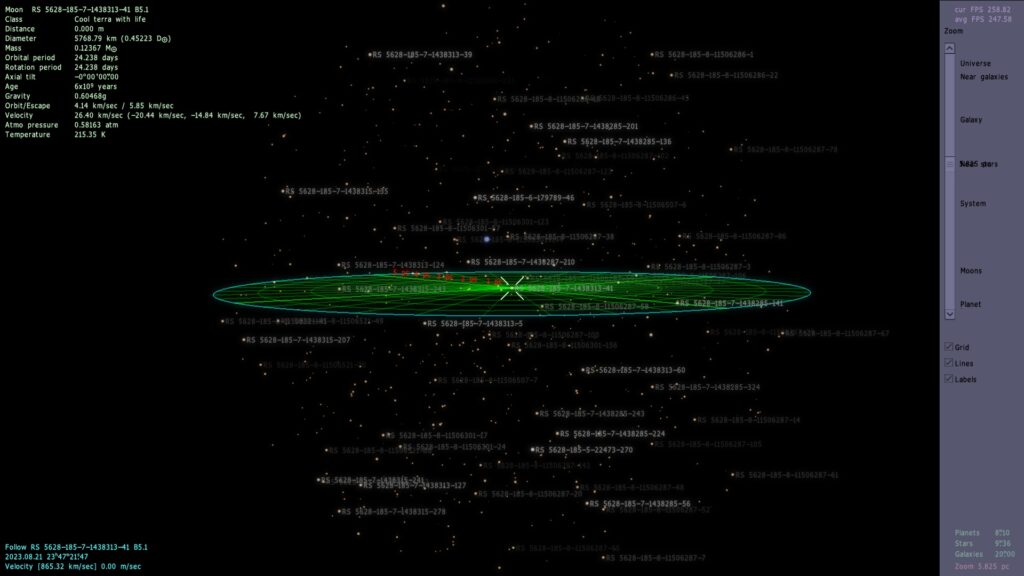 Zooming out some more, and we can see where the neighboring star clusters (light green lines) and nebulae (red lines) are placed. 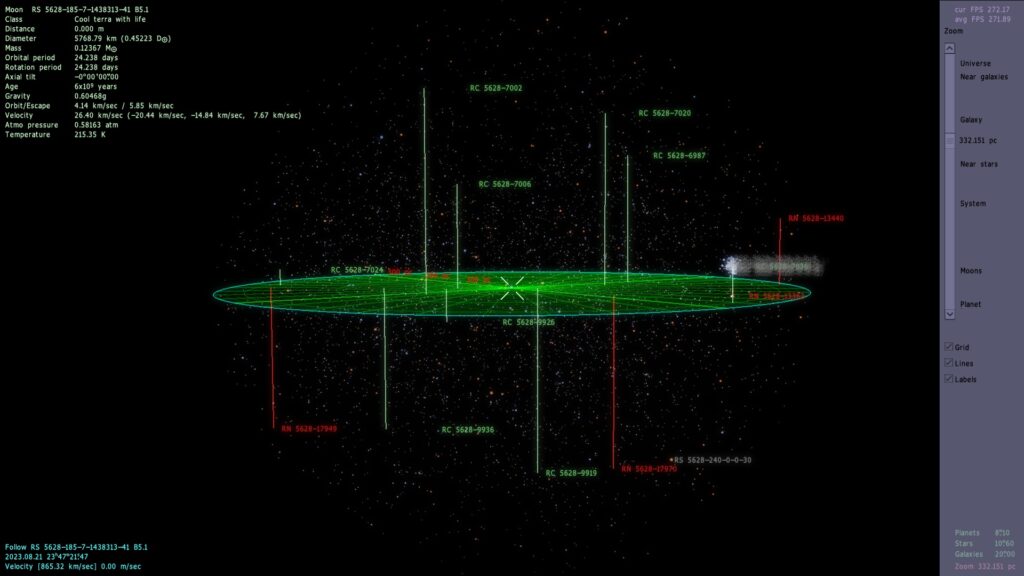 Zooming out some more, and we can see a forest of lines, pointing to star clusters and nebulae. 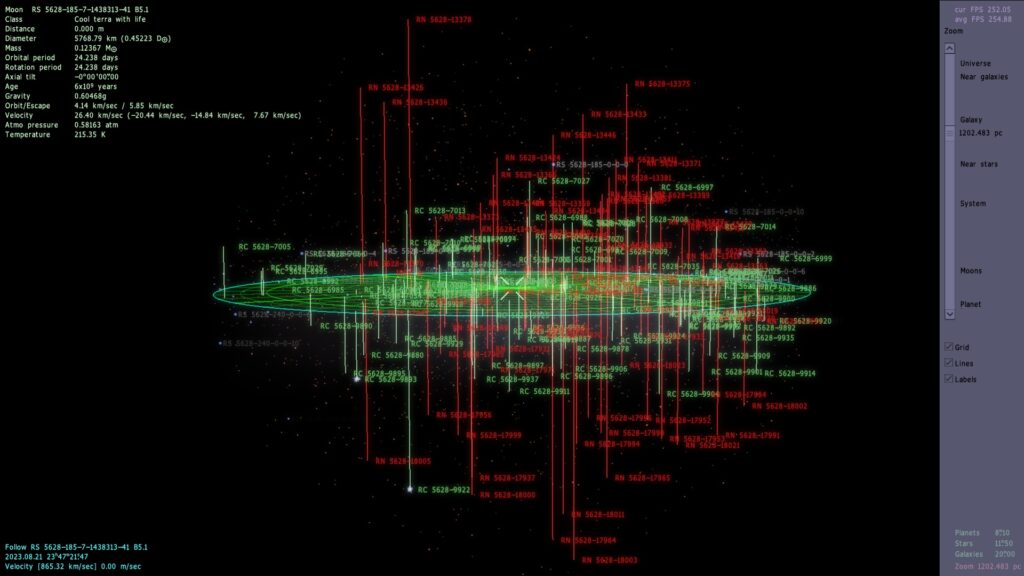 Let's switch off the lines and labels by using the check-boxes on the toolbar... 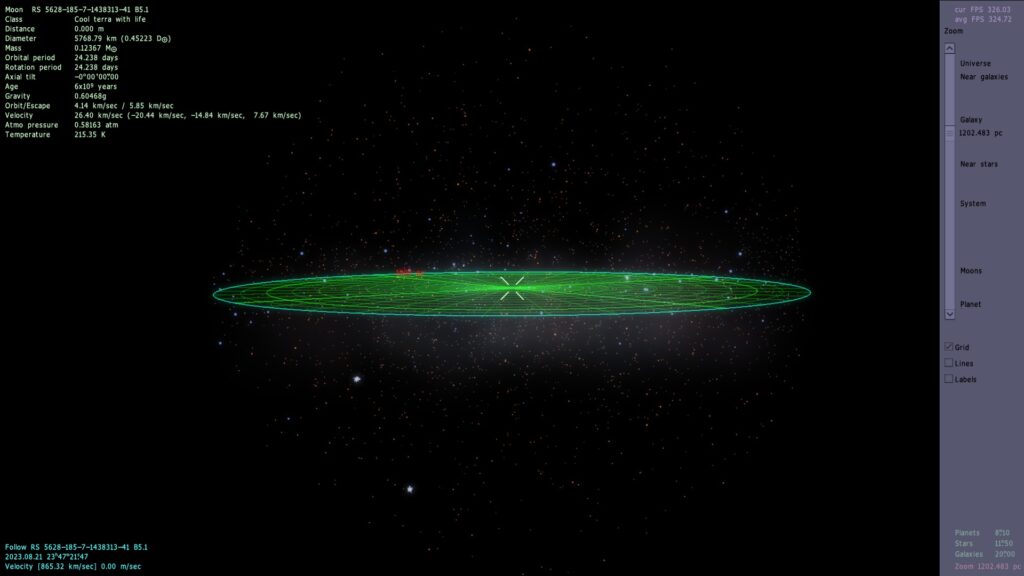 ...and then rotate the view to display a chunk of the galaxy. 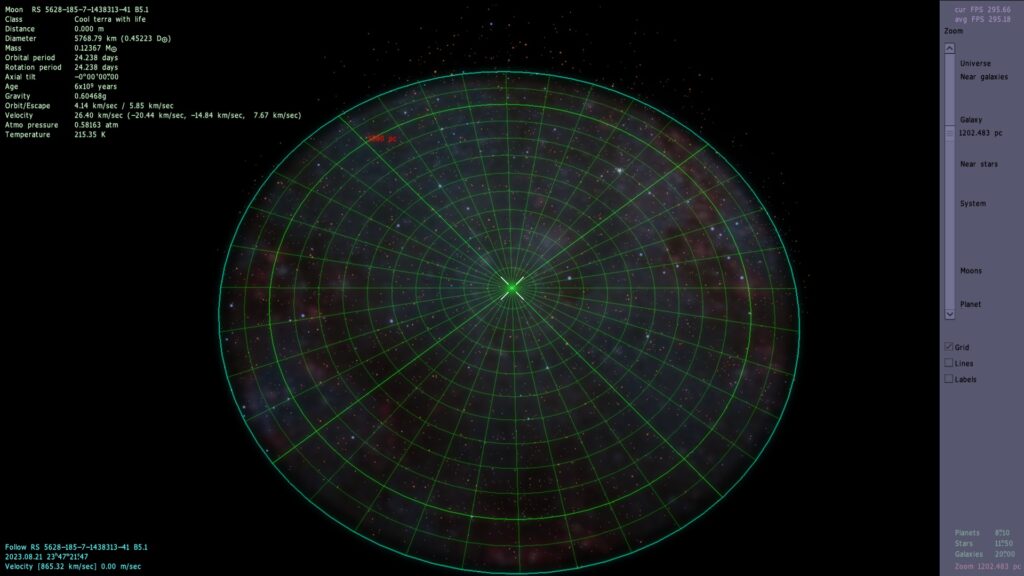 Zooming out some more, and we can clearly see the spiral arms. 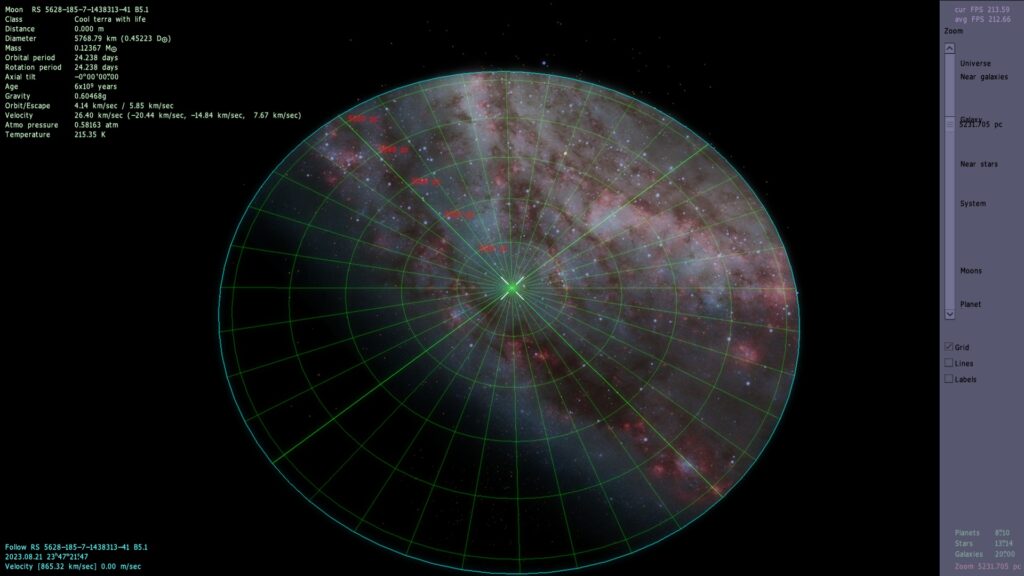 From another viewpoint, note the thickness of the galactic disk. 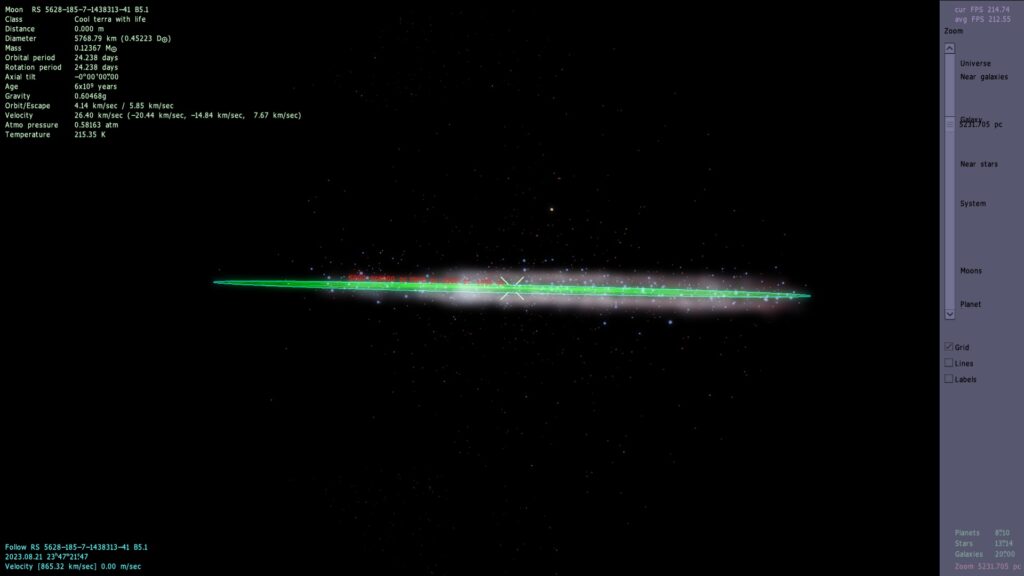 Zooming out to the "Galaxy" level allows us to see the entire galaxy. 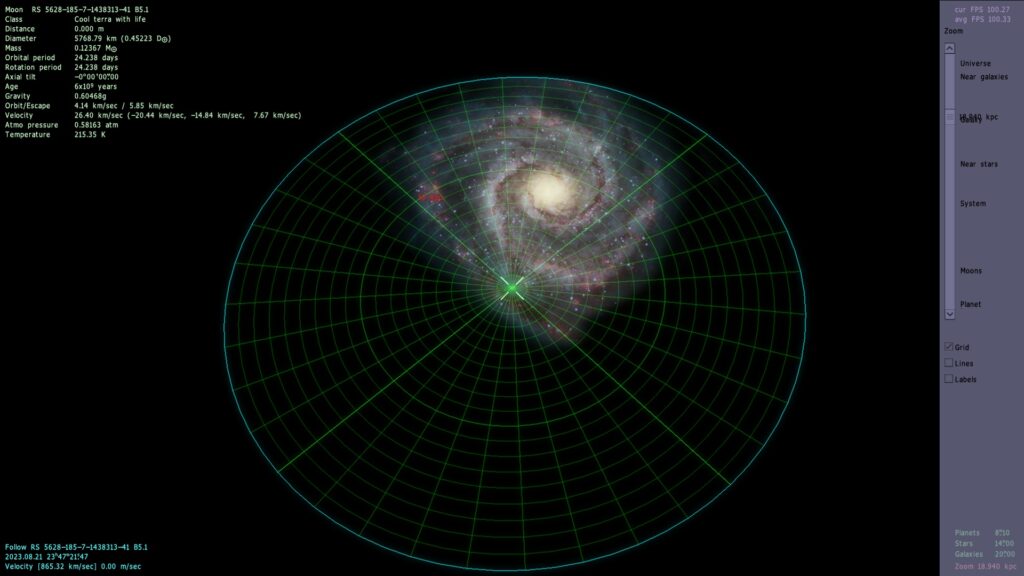 The galaxy seen again, but from another viewpoint. 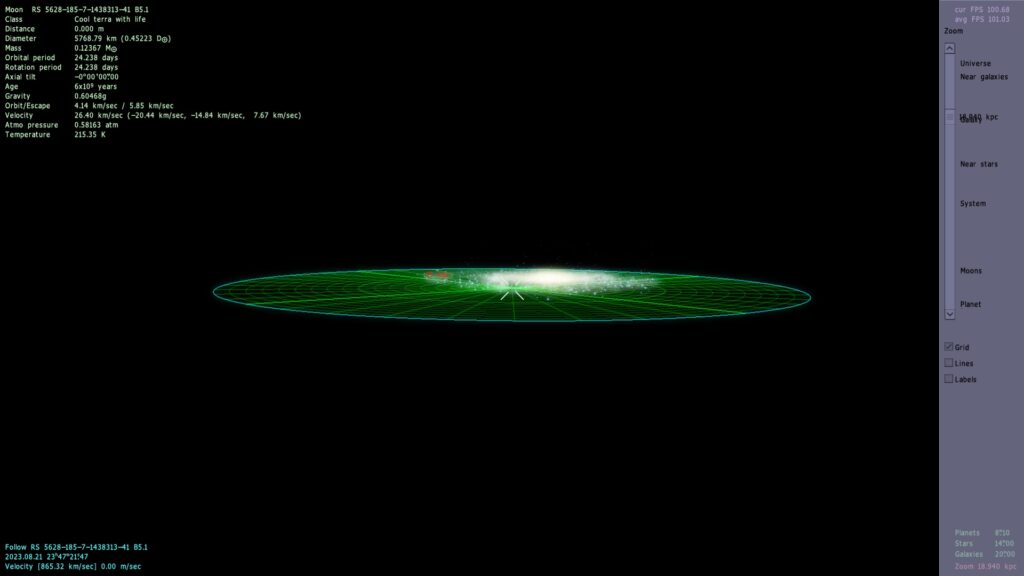 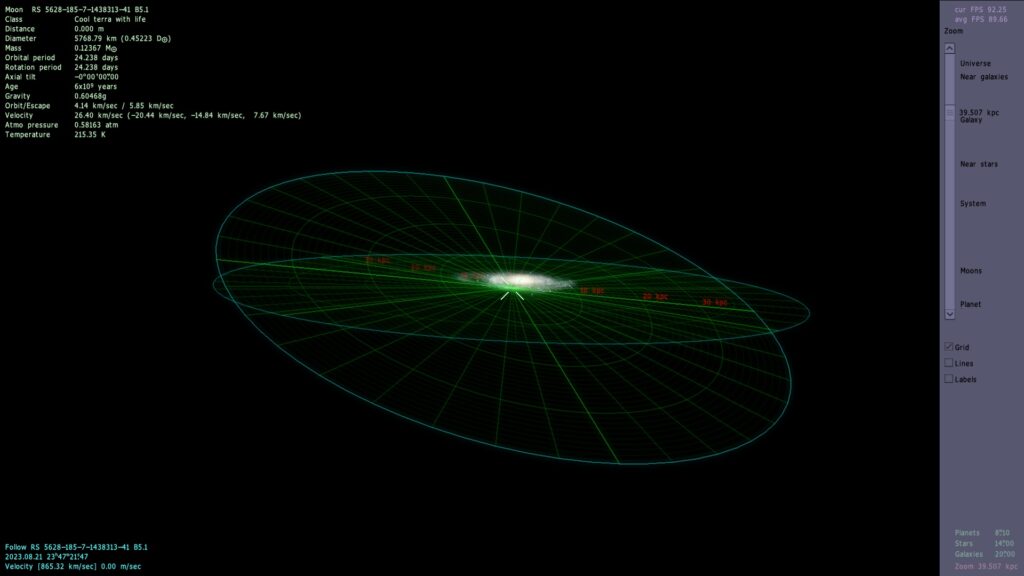 Let's enable labels and lines back. 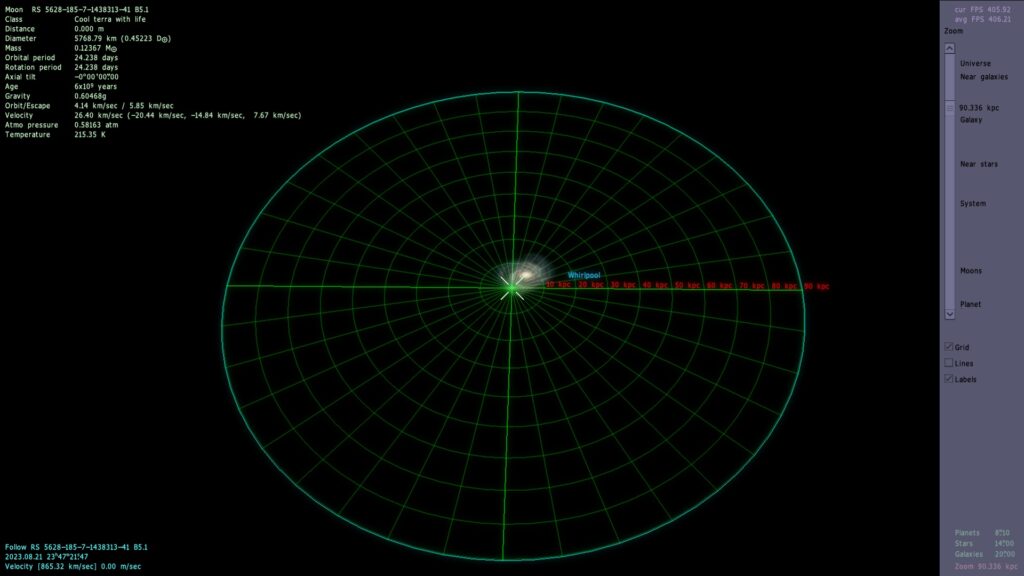 Zooming out some more, and we start to see the neighboring galaxies. 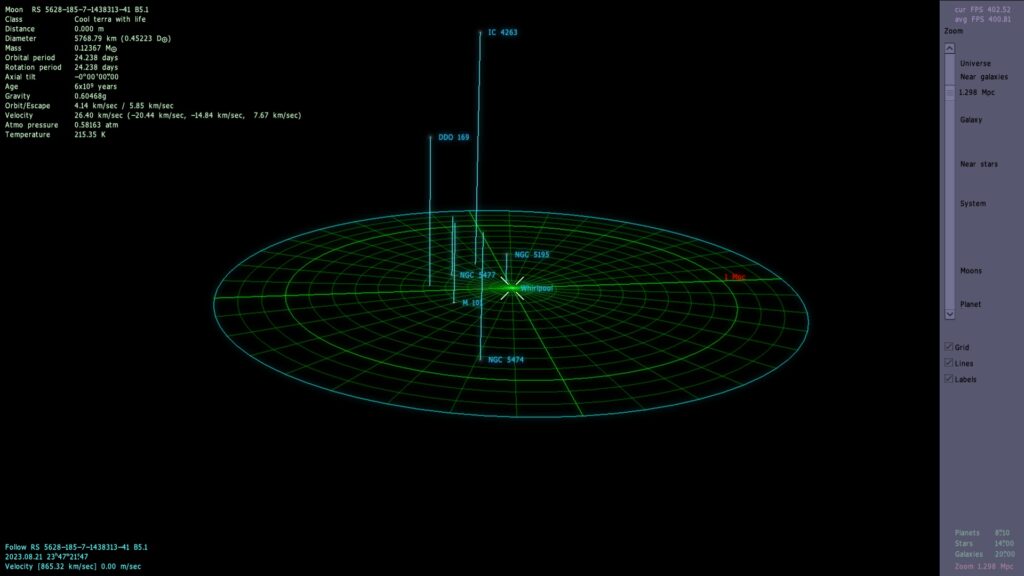 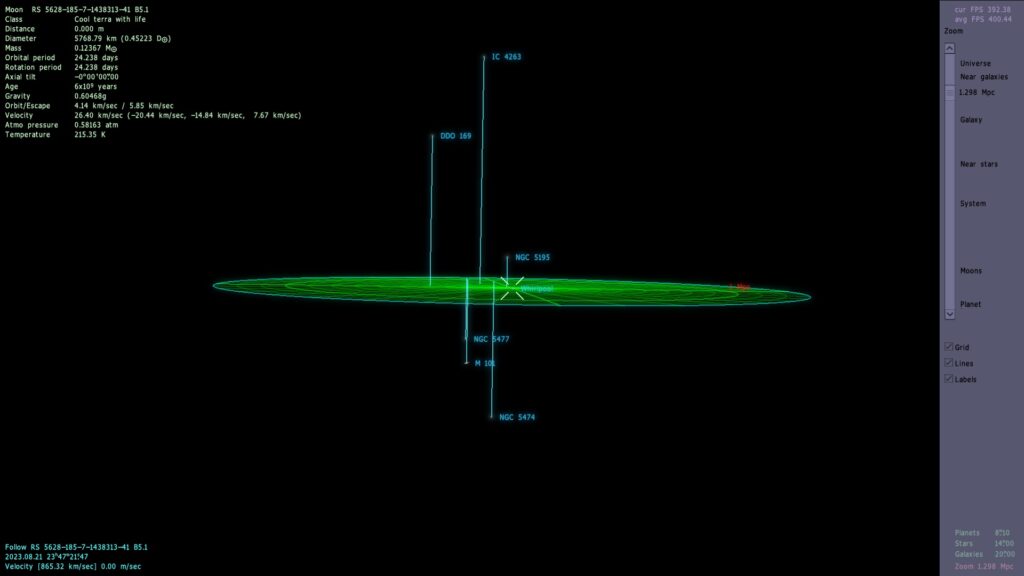 Zooming out some more... 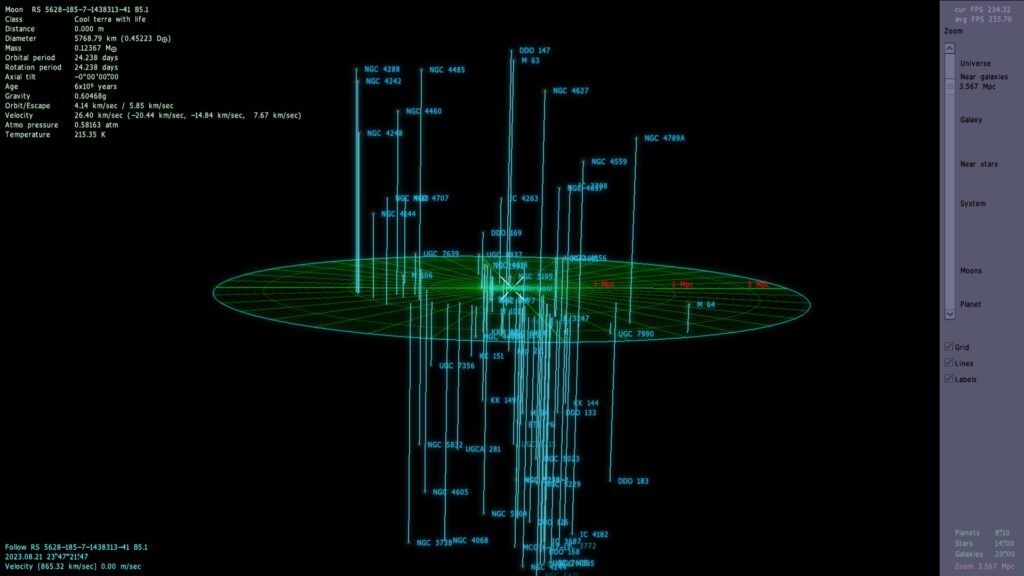 ...and some more... We can see hundreds of galaxies. The blue lines have been removed to prevent the map from being overloaded. 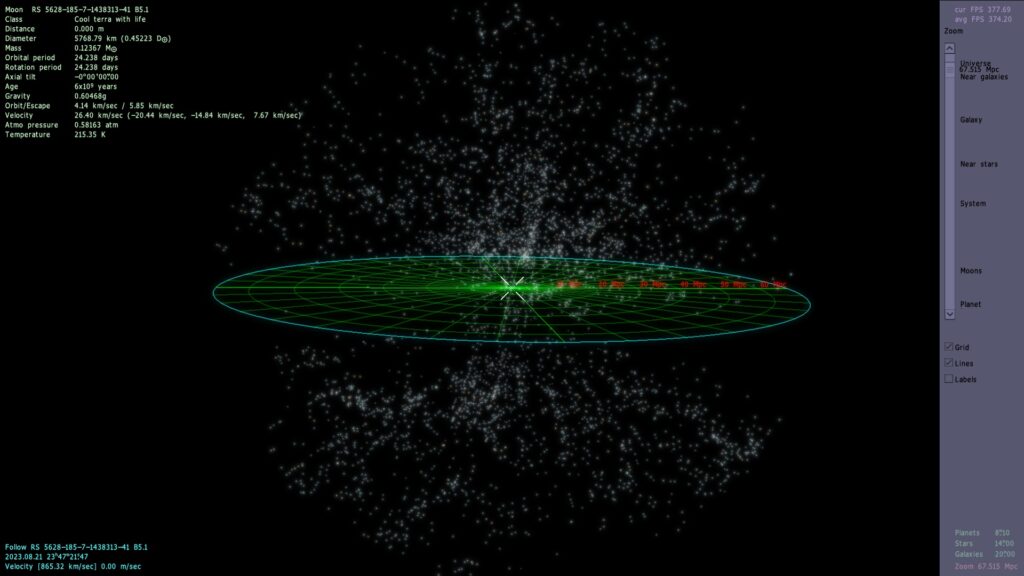 Zooming out to the maximum "Universe" level allows us to see almost all the galaxies in the current SpaceEngine catalog. 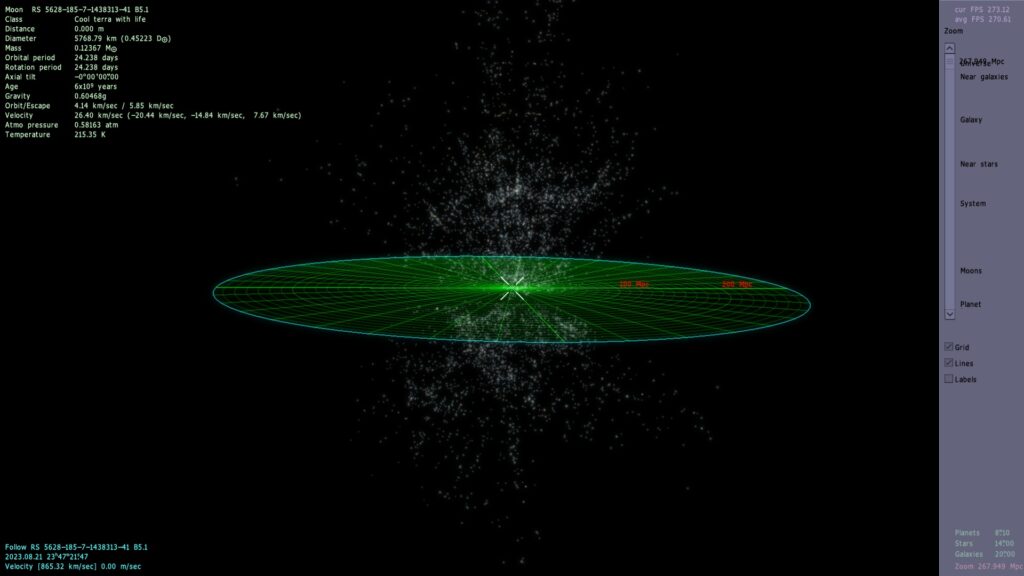 From another viewpoint. Once procedural galaxies are implemented, they will fill the gaps in the catalog and flood-fill the entire Universe to an almost infinite scale. 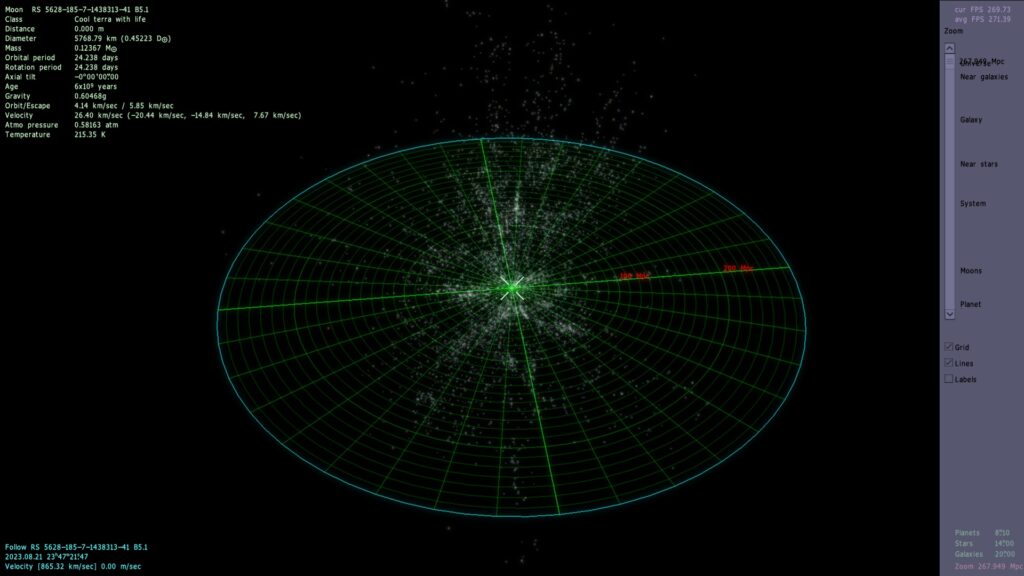 The map can be manipulated in all three directions by left-dragging of the mouse button or by using the movement keys, zooming is done by using the mouse wheel or the Zoom slider, rotation around the map's center is doing by right-dragging of mouse button. Any object visible on the map can be selected by left-clicking on it, and the selection remains active after the Map is closed. You can fly to a selected object directly in the Map mode by pressing the [G] key (the Map will be closed automatically). You can also switch the Map to any object by double clicking on it - the Map will be scroll to that object automatically.